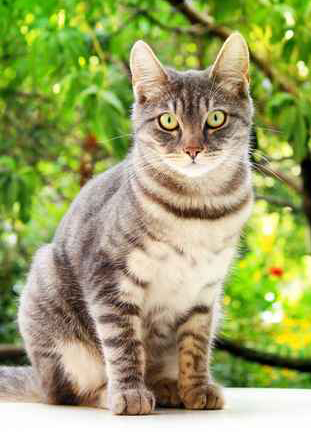 Angel, a 12-year-old neutered male Tabby cat had been losing weight. His family had owned him since he was a kitten, and he was especially close to the oldest daughter who had been away at college for several months. His owners reported that he had quit grooming, had occasional sneezing episodes without discharge, and had vomited undigested food several times in the last few weeks. The owners felt that there was not one specific problem, and they were concerned that he was upset because his special person was no longer at home.

On physical examination, Angel was thin with a coarse and matted hair coat. Abdominal palpation revealed no major structural abnormalities, but palpation of the cranial abdomen caused Angel to retch.

Blood work and abdominal ultrasound were recommended. The complete blood count was normal.  Azotemia was noted on the chemistry panel (BUN elevated at 45; n= 16-35 mg/dL; creatinine elevated at 3.0; n = 0.9 - 2.5 mg/dL). Urine was collected via cystocentesis. The urine specific gravity was 1.021 with 30 - 50 rbcs and 1+ protein. Urine pH was 5.5. Thyroid function was normal.

Abdominal ultrasound revealed a stone lodged in the mid to distal portion of the left ureter. The obstruction was causing hydroureter and hydronephrosis. The right kidney was enlarged, as would be expected with compensatory hypertrophy. No other significant abnormalities were noted on ultrasound.

Angel recovered very well from surgery, and his appetite returned to normal. Recheck of his renal values 10 days after surgery showed creatinine within the normal range and BUN only slightly elevated. Stone analysis confirmed a 100% calcium oxalate stone. Angel will be maintained on Hill's c/d Multicare canned and dry food. The diet choice will help maintain a neutral urine pH. Feeding canned food will help maintain urine concentration at less than 1.030, which helps prevent stone formation. We will monitor renal values and urinalysis over time. Abdominal ultrasound can also be done to monitor resolution of the hydronephrosis and right-sided hypertrophy.

Angel's signs of illness were very vague. Advanced bloodwork pointed us to the kidneys and the ultrasound showed us what the real problem was. Surgery allowed a successful resolution of the problem and Angel is now back to normal.