Inherited Ventricular Arrhythmia In Young German Shepherds: How Careful Examinations Can Be A Life Saver 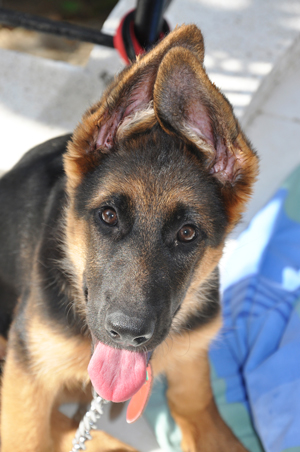 Presenting Complaint: An arrhythmia was detected during a routine preanesthetic examination. Repair of a malocclusion was being planned. No syncope, cough or lethargy was noted, and the puppy was active, and comparable in size to its littermates.

Diagnostics: CBC, biochemistry panel, and troponin level showed no significant findings. The troponin level was not elevated at <0.2 pg/ml. An echocardiogram revealed good contractility and normal cardiac chamber dimensions. There was normal cardiac size and function. No abnormal flows were associated with the aortic, pulmonic, mitral, or tricuspid valves. Frequent ventricular premature contractions were seen as couplets and triplets, with a high coupling rate. A Holter was performed (short strip pictured below).

Cardiovascular Examination: No heart murmur was noted, but an abnormal rhythm was ausculted along with pulse deficits.


Comments: This case illustrates the importance of a careful physical examination and the cooperation and collaboration between the specialty services at Arizona Veterinary Specialists. As a result of Dr. Visser's careful auscultation, we were able to detect a potentially life-threatening condition in this patient and start appropriate therapy to try to lower its risk of sudden death.


German shepherds have an inherited ventricular arrhythmia that affects young dogs between 3 and 24 months of age. This disorder has been studied by the veterinary cardiology service at Cornell University. Abnormalities in cardiomyocyte calcium cycling have been documented via electrophysiology. Approximately 33% of dogs die suddenly of these arrhythmias, most commonly between 5 and 9 months of age. A diagnosis usually requires a Holter monitoring period to catch the dangerous arrhythmia. After 24 months of age, the arrhythmias diminish.