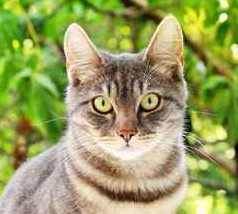 How Does Valley Fever Differ In Cats?

We are all aware of the many faces of valley fever in dogs. We readily add on a valley fever titer to any case, and for the most part, treatment is straightforward. However, like everything else with cats, treatment for valley fever can be more complicated. The clinical signs can range from weight loss and mass lesions to multiple enlarged lymph nodes. Other possible signs might include difficulty breathing, abdominal distension, vomiting, and diarrhea. Cats are considered more resistant to infection than dogs, but unfortunately, they are also often more resistant to treatment.

The following two cases show the different faces of valley fever in cats and some of the treatment options available.

Buddles is an 11-year-old neutered male cat that presented with swelling on his neck, which progressed to severe weight loss, generalized lymphadenopathy, and anorexia.

An abdominal ultrasound showed multiple enlarged lymph nodes in his belly. He was diagnosed with valley fever after the aspiration of a peripheral lymph node.

Buddles responded well to the new medications, is currently gaining weight, and he has had almost complete resolution of his enlarged lymph nodes. He is happy, active, and eating well at home.  He is still receiving his oral medications but is not currently receiving amphotericin B treatments due to a decline in kidney function.

Bug is an 8-year-old neutered male cat that presented with pleural effusion.

Valley fever was diagnosed after lab work. His owners declined an echocardiogram to look for pericarditis and elected to treat him with only oral medications.

He was started on oral fluconazole and prednisolone. Initially, Bug responded well and was weaned off the prednisolone.

Approximately three months into treatment, Bug started to decline, and he presented with a rapid respiratory rate and increased effort. A return of pleural effusion was suspected, but his owners declined radiographs or thoracocentesis. Prednisolone was restarted, and Bug improved. He has been tapered to a low dose of prednisolone every other day and continues to do well.

These two cases show just a few examples of the many faces of valley fever in cats; luckily, these two cases are success stories. However, in many cases, cats do not have a positive outcome. Owners should be offered aggressive treatment options and should be counseled regarding the potential for a bad outcome to help them make informed choices for their pets.